Cancer cells cannot withstand heat at temperatures of 42°C for 2 hours or more. Vithèr has developed a method for heating up a body for 2 hours to a temperature of 42°C. The procedure is performed under general anaesthesia, thereby creating a breakthrough therapy against metastatic cancer. 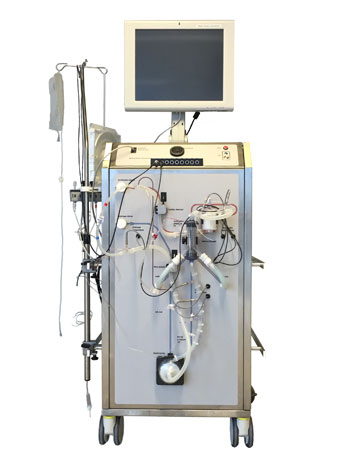 Vithèr Hyperthermia is a dutch company founded in 2010 with the aim of developing a new cancer therapy in which the body is heated to 42°C for 2 hours. Cancer cells cannot withstand this temperature. The warming of the whole body is achieved by VV-Pish: Veno-Venous Perfusion induced systemic hyperthermia. This means that the blood is heated up by a tubular system and a medical heat exchange device outside the body and is pumped through the body via the venous system so that it eventually heats up the entire patient.

The first experimental performances in the USA by VV-Pish create the expectation that a groundbreaking new therapy for metastatic cancer is being developed. Results in an extension of life and improved quality of life.

The device has now been developed and tested. Animal studies have been conducted to demonstrate safety. A study with patients is in preparation.

There are also new developments in which hyperthermia can provide reinforcing support to other anti-cancer treatments such as chemotherapy, among others: see New Development.

The development team at Vithèr Hyperthermia consists of Dr Marcel Mignot, ir Peter van Paassen and Mr Johannes Wolters. Dr Marcel Mignot is a gynaecologist with a special interest in cancer immunology. He is the initiator of the project for WBH and manages this especially from the medical point of view. ir Peter van Paassen, an engineer trained at the University of Delft, spent 25 years working in medical technology and is engaged in engineering and process monitoring. Johannes Wolters has experience in accountancy and is the director of Lode Holding. He has the financial, organisational and chairman position.

The founders of Vithèr Hyperthermia are Dr Marcel Mignot, ir Peter van Paassen and Johannes Wolters. They “found” each other in 2009 and continue working together on this ambitious project in oncology. In 2010, they founded Vithèr Hyperthermia in order to achieve the objective of: a fourth pillar for cancer treatment besides surgery, radiotherapy and chemotherapy. Important factors in this collaboration are their common ambition to succeed in this project, and their friendship – which ultimately is the basis for making the sometimes difficult and strategic decisions needed to achieve the objective. Several other people are involved in the Vithèr Hyperthermia project, to add strategic value backgrounds in business administration, advocacy, recruitment and corporate governance. Vithèr’s funding, in addition to own resources, is done via cooperation with Economic Affairs of the Netherlands and East Netherlands Participation Company. 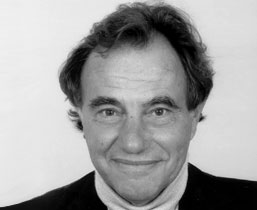 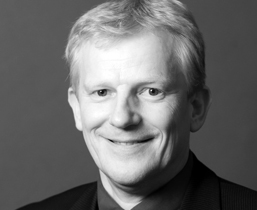 Dr Marcel Mignot, Mr Johannes Wolters and Mr Peter van Paassen founded Vithèr Hyperthermia in 2010. They developed whole-body hyperthermia by means of venous (venous) perfusion of the entire patient in the treatment of cancer. This is based on studies and publications at the beginning of the 21st century, especially those of Prof Jay Zwischenberger (Zwischenberger et al 2004). One of the first steps of Vithèr Hyperthermia was the development and production of equipment, capable of performing Whole-Body Hyperthermia (“WBH”) heat treatment. The Vithèr WBH Device, was produced by Relitech in Nijkerk and delivered to Vithèr at the end of 2011. Extensive “dry testing” was in 2012 and animal tests on pigs were completed in 2013 at the Radboud University Hospital in Nijmegen. Clinical trials of the WBH treatment on humans are scheduled in view of obtaining FDA and CE clearance.

Vithèr Hyperthermia has been engaged in the development of a new system for Whole-Body Hyperthermia (WBH) based on a perfusion hyperthermia-based system in which the patient’s body is heated to 420C for two hours.

The above procedure is also called ‘Vv-Pish “(veno-venous perfusion induced systemic hyperthermia). In such a procedure it has been demonstrated by Zwischenberger et al. (2004 *) that a significant prolongation of life was obtained (5x) in an experimental study in patients with NSCLC “Non-Small Cell Lung Cancer” in the early 2000s. Read Zwischenberger’s publication here*).

Vithèr obtained the patents and technology for this treatment from ThermaSolutions and developed the concept further. Moreover, they developed new proprietary software algorithms to predict and control the temperatures in all organs and, in particular, to control the brain temperature safely during the treatment procedure. Extensive animal testing has been carried out and successfully completed using the WBH equipment developed by Vithèr. The next step is to carry out the first study on patients. A description of the WBH equipment is given below. 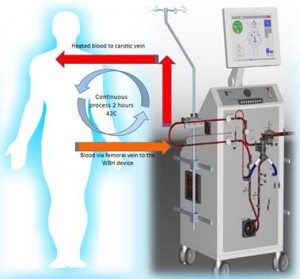 Schematic representation of the WBH procedure

The red arrows in this schematic picture indicate the direction of blood flow in the disposable part of the WBH device. The WBH device withdraws blood from the body in a continuous blood flow through the left femoral vein at a position near the distal vena cava disterior. The blood is then heated outside the body in the WBH device to a maximum of 45°C. The heated blood is then returned to the body through the right subclavian vein or, alternatively, through the right femoral vein. During the heating period, the blood is checked for air bubbles, excess temperature and biochemistry. Haemodialysis is performed when necessary. In this manner, a body can be heated from 37°C to 42°C in 30 to 40 minutes. The procedure is performed under general anaesthesia. 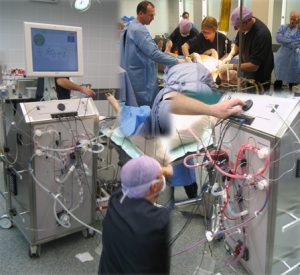 A photo collage of the WBH-device used in animal studies at the Radboud UMC Animal Laboratory in Nijmegen, the Netherlands 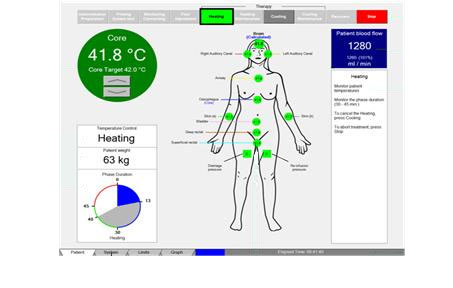 In the course of 2017, a great deal of scientific information emerged that heat (hyperthermia) has a reinforcing effect on chemotherapeutics. This means that chemotherapeutic agents can be administered in much lower doses if hyperthermia is also applied in the same period or at the same time. At the moment, Vithèr is busy producing experimental protocols in order to eventually be able to conduct patient research. The main goal is to be able to substantially reduce the serious side effects of chemotherapeutic agents while maintaining the anti-cancer effect.

Vithèr Hyperthermia operates closely with a number of companies that fulfil specific functions in the development process. Relitech BV in Nijkerk Netherlands is the engineering company that has produced the first versions of the WBH device. QPS Netherlands, a clinical research organisation based in Groningen, the Netherlands, handles the regulatory affairs and the organisation of the animal and human studies. QAid from Lieshout, the Netherlands is responsible for the CE marking through the DEKRA in Arnhem, the Netherlands. Radboud University Nijmegen Medical Centre in Nijmegen, Netherlands also cooperates closely with Vithèr on medical applicability, the animal studies and the “usability” of the design of the Vithèr WBH device. The disposables for the WBH treatment are developed and produced at Maissach, Germany at HMT MedizinTechnik GmbH.